Sheryl is back alone on Tuas to do monitoring of seagrasses there. 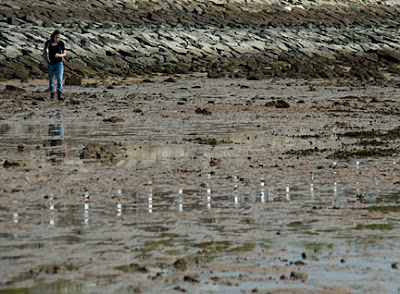 But all the seagrasses in the study areas are GONE! Sheryl checked one of the sites nearer the seawall. The area is no longer sandy and is now very rocky and there are no seagrasses here anymore.

TeamSeagrass at the Biodiversity of Singapore Symposium III (24 Sep 11)

Jocelyn Sze shares about our work with Brigadier-General (NS) Tan Chuan-Jin, Minister of State (MOS) for National Development and Manpower. He is the Guest of Honour at the Biodiversity of Singapore Symposium III. 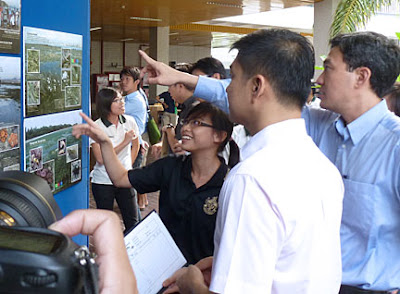 How nice to be able to share what we do with the more than 300 people who attended the Symposium!

Siti's work on seagrasses in Singapore is being featured at the Biodiversity of Singapore Symposium III to be held tomorrow 24 Sep 2011!
Here's a brief introduction to her poster...

How much are seagrasses worth?

A recent study estimates that Australia's coastal seagrass beds are worth $79 per hectare, based just on the carbon that seagrasses store.
Sea grasses store 10 to 40 times as much carbon per hectare as forests, and Australia's sea-grass meadows are the largest in the world. The report, however, also noted that 29% of the world's sea grass beds had vanished since 1879. In Western Australia, about 1,000 hectares of sea grass were lost after a particularly warm summer.