Kok Sheng, one of our Seagrassers was featured recently in the Chinese press... 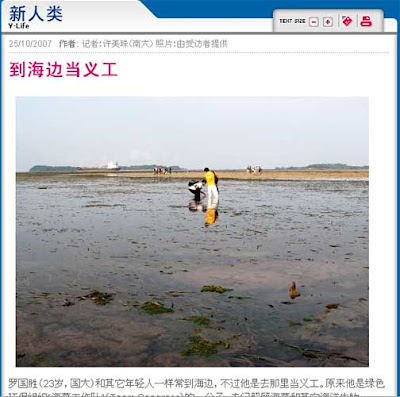 And here is a translation of the article, courtesy of Chay Hoon...

"Like other youngsters, Kok Sheng often goes to the seaside. And he is there to be a volunteer. He is a volunteer for this green group called " Team Seagrass". The group is involved in monitoring Seagrass and other marine creatures.

For the last nine months, Kok Sheng had visited Chek Jawa@ Pulau Ubin, Pulau Semakau and Sentosa with Team Seagrass to do reccees and monitoring.

As a Team Seagrass volunteer, Kok Sheng said that they will monitor the health of the seagrass and identify the species of seagrass at the monitoring sites. The data collected at these sites will be analyzed to get a better understanding of the state of the seagrass.

In addition, he said that if action was taken by us to try to heal the seagrass, we might be upsetting the balance of nature nd disturbing the life of the marine creatures. The main objective of Team Seagrass is to collect data about the seagrass. And through these information, enable ordinary folks to understand the importance of marine creatures and that we have wonderful marine creatures in Singapore.

One of KS's most unforgettable experience was the monitoring session at Chek Jawa early this year. He said " It was raining eveyday and when we were at Chek Jawa, we found many seagrass and marine creatures dead and Chek Jawa looks like a graveyard.

He said this is because the seagrass and marine creatures can only live in salinity and the large amount of rain forced these plants and animals to live in fresh water. This result in casualties as they are unable to cope the drop of salinity in the water.

The Team got completely wet this monitoring trip. Although the day started out fine and bright, it started pouring as soon as we left Changi. We huddled at Ubin Jetty until we THOUGHT the rain had eased. But as soon as we actually started monitoring, the heavens opened up!

Thus I didn't take any photos at all.

Fortunately, several Team members did, and they've posted their stories on their blogs.

From Sijie's nature scouter blog, here we were at Ubin jetty waiting for the rain to stop. 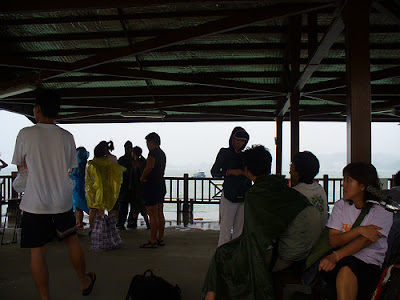 And the rain made it really hard to do monitoring... 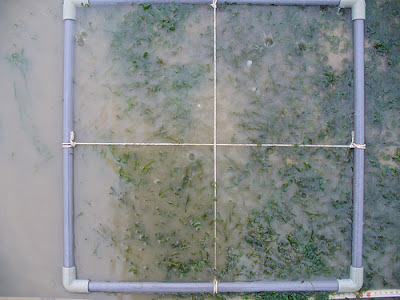 On Kok Sheng's Chek Jawa project blog a look at the rainy shore... 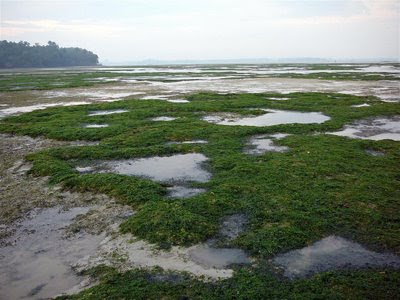 Despite the wet weather, Chek Jawa seems to be doing well with some recovery from the mass deaths. The day before, Kok Sheng's team saw the first Knobbly sea star for the year!

At the end of the trip, just as we were about to go home in the gathering gloom of dusk, we saw a civet cat!! More about this sighting on the wildfilms blog.
posted by Ria Tan at 7:03 PM 0 comments

We're back on our most favourite shore! Wow, was it hot though! Here is Robin, having laid out all the gear while the rest of us were landing.

We quickly got started on monitoring to catch the tide. I got arrowed to do Site 2 which was really far away. When we got there, we realised two of the poles that marked the start point were missing! Fortunately, spare poles were brought along. And soon Robin and Wei Ling got the missing points marked out again. 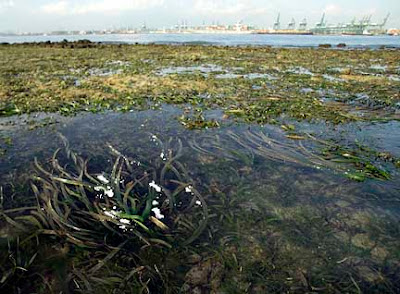 The vast seagrass meadows were dotted with tiny white male flowers. Cyrene is a submerged reef that lies just opposite our container port and is flanked by Pulau Bukom and Jurong Island. And yet, it has such marvellously rich habitats.

Well, back to those blooming seagrasses...

The male flowers are really tiny (the white things) and look like bits of styrofoam floating on the water. They emerge from a large bract (see the V-shaped thing in the right photo) and tend to cluster together to form rafts.

The female flowers are much larger and have three large white petals. Here is a female flower with several male flowers clustered around the parts which count for pollination. Plant sex in action! Oops.

The seagrass meadows of Cyrene are full of life!

The seagrasses had tiny little crabs, and rare snails.

The baby flower crab is quite common, but the cylindrical seagrasses it was seen in are rare. The Black-lipped conch (Strombus urcea) is a snail on the list on Singapore's threatened animals due to habitat loss. 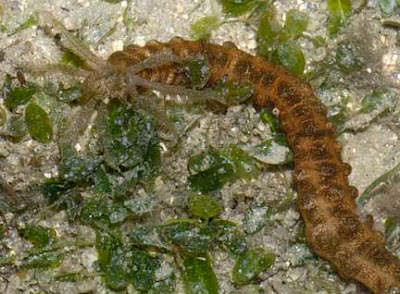 These long delicate animals are sometimes mistaken for worms. But they are actually relatives of the sea stars, sand dollars and sea urchins!

And above the water, there's life too! 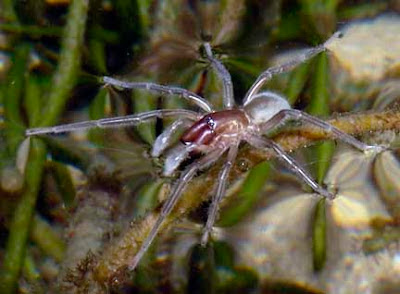 I saw this little marine spider (Desis sp.) literally walking on water. This is a true spider but it lives in the intertidal. At high tide when the entire Cyrene is submerged it hides in a crevice in coral rubble, breathing from a bubble of air. At low tide. it comes out to hunt.

Among the coral rubble was also this small Giant carpet anemone (Stichodactyla gigantea). 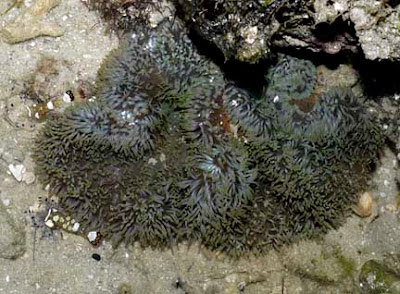 It had a pair of anemone shrimps (Periclimenes brevicarpalis) which I totally missed until I processed the photo when I got home *slap forehead*.

Cyrene is like the Chek Jawa of the South. Many of the animals we encounter on Chek Jawa can also be seen on Cyrene reef.

These feathery animals are worms! Fan worms have a bristley segmented body that is hidden in a tube. Their heads are topped by feathery tentacles that emerge from the tube to gather food.

I also came across some peacock anemones!

These animals are more frequently encountered on Northern shores such as Changi and Chek Jawa.

There were really small Common sea stars (Archaster typicus) everywhere today! This is quite an unusual sighting.

The sand bar is also littered with sand dollars.

But what was amazing was the many small Knobbly sea stars (Protoreaster nodosus) that we saw today!

There were red ones and brown ones.

And this poor 4-armed one which also had lost the tip of one of its remaining arms. Someone must have really chomped on it. Poor thing! 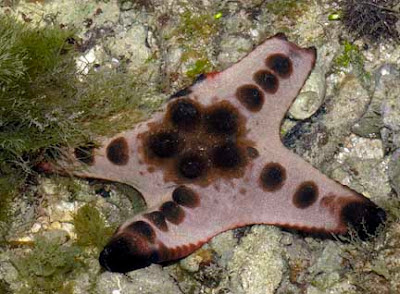 All too soon, the tide turned and the sun set. Wait a minute! We nearly forgot to take our traditional group TeamSeagrass photo! The team is a little fried from the heat and tired from all the work and running around. So this is the best photo I took.

We missed an earlier slated trip due to boat problems. This time Shufen performed yet another miracle and got us a boat with a dinghy so it was a wonderful safe landing. Many other team members took lots of amusing photos of the landing. Here's some shared by Ron on his tidechaser blog.

This weekend is going to be rush of many monitoring sessions! I'm looking forward to it!

Seagrass Angels in the news!

Our wonderful Seagrass Gals from RGS have an article published in the Seagrass-Watch newsletter! 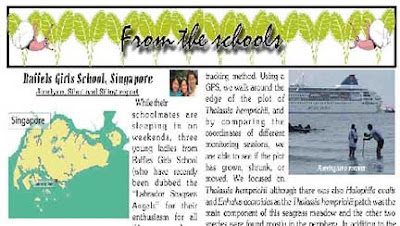 Read about it on their Labrador blog and in the Seagrass-Watch newsletter.
posted by Ria Tan at 11:22 PM 0 comments