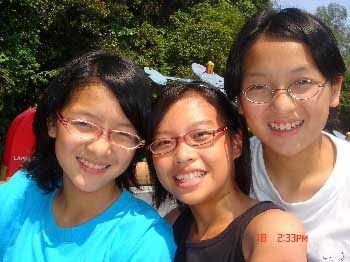 The intrepid young ladies of RGS were out on Labrador for seagrass monitoring. In high spirits as the tide went low. Read all about their trip on their labrador blog.
posted by Ria Tan at 5:27 PM 0 comments

Seagrass Watch around the world

While we've been busy with our monitoring sessions, here's what the rest of International Seagrass Watch have been up to...

At Bolinao in the Philippines, they are doing exactly what Siti is trying to make us do at Semakau! I guess we should be grateful the water is not THAT deep at Semakau when we do our monitoring :-)

It's quite exciting what we might find along our transect lines as we do our monitoring. Here is what the folks at Midge Point found next to their transect line!

Unfortunately, the poor turtle wasn't well and had swellings on its body.

Well I guess our shark sighting at Semakau is quite exciting. Even though it wasn't right next to the transect line. Perhaps if we did the monitoring at really high water it might be so...hmmm. 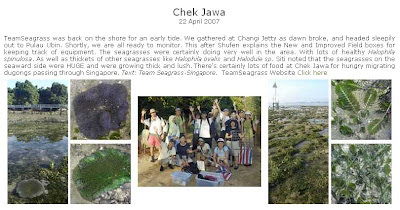 View all the photos and get updates on the International Seagrass Watch gallery
posted by Ria Tan at 7:42 PM 0 comments

It was time to monitor the Tuas seagrasses again, and our friends at Schering Plough were out to do the job despite the threatening weather. 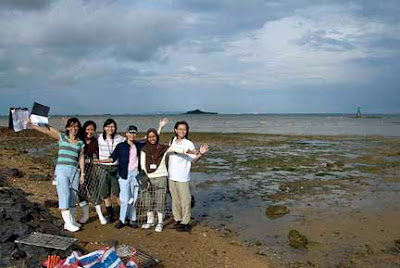 After a briefing by experienced TeamSeagrassers Sheryl and Helen, the volunteers were off to do this small but grassy shore. 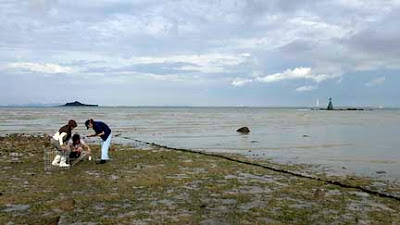 Sheryl led one team to do the patch near the sea wall,

While Helen led another to do the patch in the middle of the sandy shore. Today's monitoring was rather like Christmas "HO-HO-HO" all the way (Seagrass joke, you have to be a Seagrasser to get it, sorry).

Very soon, they were done with monitoring and we went to have a little look around before the tide came in. The fluffy 'Teddy Bear' crab or Hairy crab (Pilumnus sp.) is always a big hit; with its beady eyes and almost cuddly look. The Tiger moon snail (Natica tigrina) is quite common on this shore, but rarely seen elsewhere.

The tide wasn't low enough for us to have a look at the reefs, but among the coral rubble were lots of colourful sponges. We also saw several big and healthy carpet anemones as well as lots of hermit crabs. 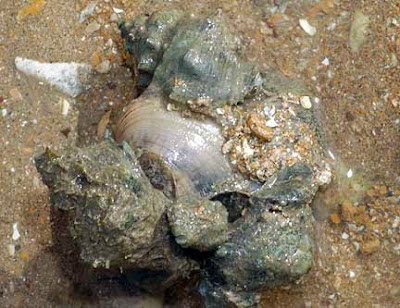 The Find of the Day for me was this huddle of determined Drills (Family Muricidae). They were firmly stuck to a clam, which must certainly be shivering in its valves. The Drills clung on tenaciously even though I turned the bunch slightly to show everyone what was going on. Drills can patiently and slowly drill a hole through the shells of snails and clams. I think the clam is doomed.

The undisturbed Tuas shore is also a great place for herons to fish. This pair was busy on the reefs near the Merawang beacon.

The staff at Schering Plough are not only involved in TeamSeagrass, but have also been diligently replanting the shore with mangroves! Helen showed me some of the replanted areas while we waited for the volunteers to arrive before the start of the seagrass monitoring. 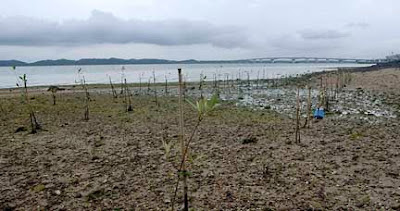 Here's one large replanted patch, facing the second causeway in the distance. 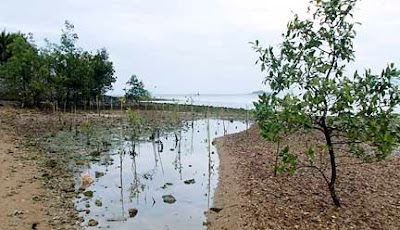 Another patch among existing mangrove trees. 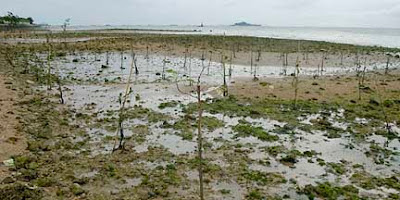 And yet another patch! Our seagrass monitoring area is behind in the background.

I also learnt that Shering Plough staff are also helping out with terrestrial reforestation.

TeamSeagrass is back in action for the super low tides of May. And it's time to check out Semakau again! 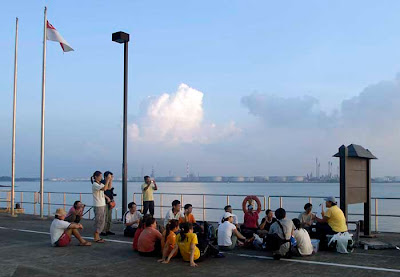 A rather sleepy bunch arrived on the landfill jetty in the pink glow of first light. This portion of the Semakau Landfill where Siti is giving the Traditional Wake-Up Briefing, is the location of the former Pulau Saking. It overlooks industrial installations on Pulau Bukom (in the background).

The Semakau Landfill is of course, the place where ALL our rubbish ends up. It might thus seem surprising to find seagrasses nearby. And astonishing that this is probably Singapore's LARGEST seagrass meadow. And here is the team, on the shore, ready to monitor those vast seagrass meadows! 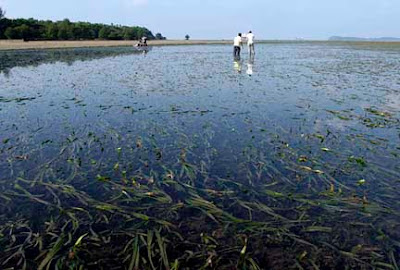 Shawn and I did one transect together. At the Dreaded Transect 2, with squishy mud soft and treacherous and often knee deep in water. Both of us had a hard time with tiny seagrass features and reading off minute markings on the ruler. We declared thereafter that old people with bad eyesight shouldn't be paired with one another :-)

But Shawn and I had a great time finding ALL the species including the Noodle seagrass (Syringodium isoestifolium) which he hasn't seen before! Oh, except Spoon seagrass (Halophila ovalis), which were there but outside the transect area. Semakau is indeed a fabulous seagrass site! 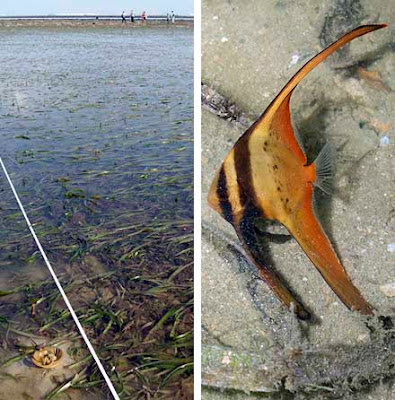 The vast seagrass meadows are home to all kinds of animals. A perfect horseshoe crab moult was found next to Dickson's transect line. Helen found a juvenile batfish next to her transect line! After the monitoring, we wandered around for a while before the tide came in. A sea snake was spotted! Busy foraging in the reef edge. Elsewhere, Budak and team saw a huge synaptid sea cucumber. And Dickson and his team saw lots of stuff too, all shared on his blue heaven blog.

I worked hard today as several people didn't turn up for the trip. So I didn't get to take many photos. And it got really hot as the day progressed. Whereupon, I meandered quickly over to the shady coastal forest.

On the way there, I disturbed hordes of sand bubbler crabs (Dotilla sp.) and Orange fiddler crabs (Uca vocans) on the vast sandy shore. 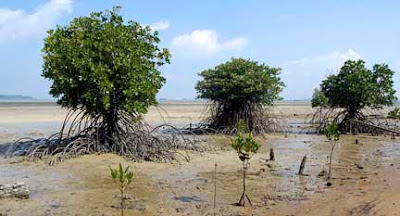 The shore is lined with mangrove trees. Pulau Semakau has lots of mature mangroves with some rare species. These on the shore are Api api trees (Rhizophora sp). These trees can live partially submerged in the sea and have special roots to stay upright in the soft mud.

Though the trees look similar, they are different. One way you can tell them apart is by their flowers. Rhizophora stylosa and Rhizophora mucronata have flowers on long stalks, while Rhizophora apiculata has chunky flowers stuck on the stem. 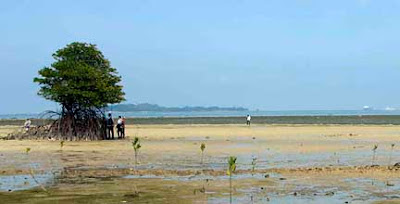 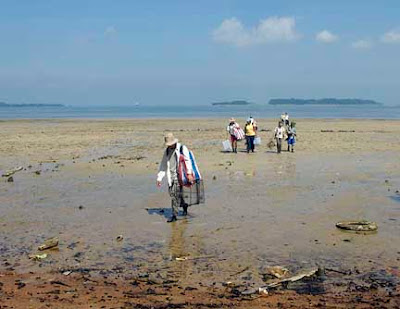 All too soon, the tide turned and it was time to head back.

We not only monitored the shore, but also removed several fish and crab traps (Shawn is hauling one here in the photo). Budak had an encounter with the perpetrator of the many driftnets and traps we have been finding on this shore. He shares this encounter as well as other sad results of these wasteful fishing habits on the budak blog.

After a quick wash up, the team headed down to the southern most point of Semakau on the landfill. Here, we had a breathtaking view of the Southern islands under a blue blue sky. Some of the regulars (who had "been there, done that and bought the t-shirt") opted to remain on the air-con bus and proceeded to demolish a packet of peanuts.

On the way back, we drive along the huge lagoon created out of the landfill walls but which have yet to be filled up. Helen was just mentioning that we saw a shark the last time we were there when Andy yelled "Shark!". The bus was quickly stopped and everyone rushed out to have a closer look. 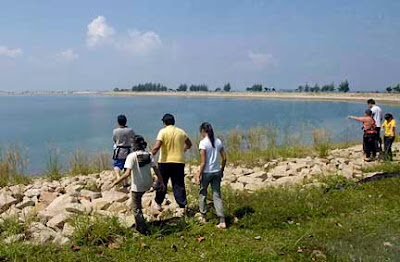 Kevin took a shot of the shark! It was a Black tipped reef shark Have a look at his nature spies blog for the photo. It was indeed a Shark Frenzy. With the humans being in a frenzy for a change.

Pulau Semakau is indeed a strange paradox of landfill and natural beauty. The landfill is good for another 40 years. If we reduce, reuse and recycle, the landfill may last longer. Thus sparing the surrounding spectacular natural shores from further development. Each one of us CAN make a difference for Semakau!

For more about this island: there was recently an article about Pulau Semakau: Pulau Semakau: Island paradise . . . and landfill By Matthew Phan Business Times 11 May 07. Jeffrey Low also commented on this article on his blog with lots of information about this special island.
posted by Ria Tan at 8:19 PM 2 comments