Seagrasses are the only flowering plants adapted to grow submerged in the sea! Several fascinating species of seagrasses grow on our shores. Here's a quick introduction to all the species that can be found in Singapore.

Tape seagrass (Enhalus acoroides) is the longest seagrass found on our shores. The leaf blade is 1-2cm wide and can be 1.5m long! Pulau Semakau has vast tracts of  Tape seagrass meadows that stretch for kilometres! Tape seagrass is also plentiful at Cyrene Reef.
Male flowers of the Tape seagrass are tiny (see the small white bits?). During a bloom of Tape seagrass, little 'rafts' of male flowers are often seen floating on the water. They look like little bits of styrofoam!
Female flowers are large and emerge on long coiled stalks. The pale yellowish petals last only for a day or so. Often, all that is seen are the V-shaped bracts. Soon, the large fruit develops. It is a hairy capsule that holds several seeds. The seeds are said to be edible and are eaten by some coastal dwellers. The raw seeds are said to taste like chestnuts.
The elegant Smooth ribbon seagrass (Cymodocea rotundata) is narrower and not as long as Tape seagrass. There is a patch of this seagrass at Chek Jawa as well as Cyrene Reef. Tiny patches of it are also seen at Tanah Merah. 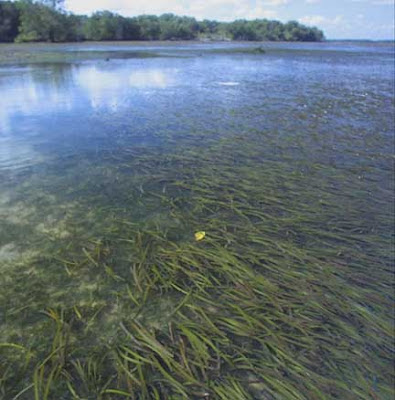 Another long seagrass, Serrated ribbon seagrass (Cymodocea serrulata) is abundant on Pulau Semakau as well as Cyrene Reef. It has tiny 'teeth' at the tip of the leaf blade which can only be seen if you look very very closely.
Needle seagrass (Halodule sp.) is long, narrow and well, needle-like. On Chek Jawa and on Cyrene Reef they can be lush and long. Elsewhere, they may be much shorter.

Sickle seagrass (Thalassia hemprichii) is indeed often sickle-shaped. A lush meadow of this seagrass grows on Labrador, the last on our mainland.
Sickle seagrass has little flowers with curly 'whiskers'.

The Noodle seagrass (Syringodium isoetifolium) is a strange seagrass. Its leaf blade is cylindrical, like plastic tubing! It is commonly seen (so far) only on Pulau Semakau.

There are several species of Halophila seagrasses. Some have oval leaves and thus called Spoon seagrasses. The various species of oval-shaped Halophila are difficult to differentiate in the field, so all of them are generally referred to as Halophila ovalis complex. These seagrasses are the most commonly encountered on many of our shores.

The beautiful Fern seagrass (Halophila spinulosa) is made up of many little leaflets. Usually a bright green, sometimes with a bluish tint, this seagrass is widespread on Chek Jawa.

Singapore is home to the delicate Beccarri's seagrass (Halophila beccarrii). The tiny leaves of this seagrass emerges in a rosette of 4-5 leaves. Elsewhere in the world, this seagrass is considered rare. But it is quite commonly seen on Chek Jawa.

The Hairy spoon seagrass (Halophila decipiens) was only recently discovered on Singapore shores! It was first confirmed in 2008 from specimens collected off Pulau Semakau at a depth of 8m. It has since been sighted at other locations in waters off the Southern islands and also at Changi and Pulau Sekudu! 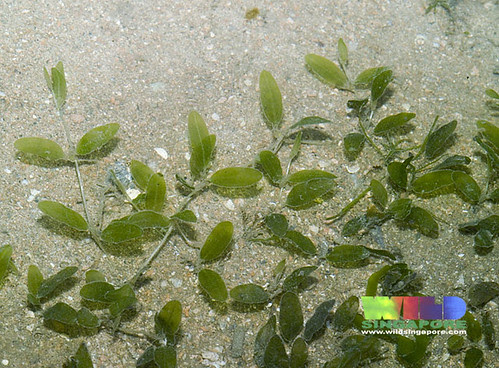 Singapore sure has a good variety of seagrasses!

Yes they are! Seagrasses form a vital habitat that affects a wide variety of life and influences (and is influenced by) nearby ecosystems such as coral reefs and mangroves.

The meadows of seagrass leaves create a miniature underwater forest. A host of small plants and animals thrive in these thickets. Seagrasses provide shelter for many animals that are not adapted for fast swimming (e.g., the seahorse and filefish). These include juveniles of larger fishes and animals that later move out into deeper waters and include commercially important fishes and sea creatures. Seagrass leaves also provide a place for animals to lay their eggs, and for small animals to settle down.

The underground stems and roots of seagrasses form a mat which stabilises the ground, while their leaves slow the water flow and thus help keep sediments down and the water clear. The leaves also trap sediments and detritus and contribute to the nutrient cycle in the ecosystem. In the stabilised ground, many burrowing creatures make their homes.

Few animals can eat seagrasses, because few can digest the cellulose that makes up these plants. Among those that do feed on seagrasses are the Dugong as well as sea turtles such as the Green turtle and Hawksbill turtle.
However, seagrasses do provide food indirectly. Microscopic algae grow on their leaves and larger seaweeds get entangled among the seagrasses. Many small animals graze on these algae. They are in turn eaten by larger animals. In this way, seagrasses are an important part of the food chain in other ecosystems nearby, such as sandy shores, mangroves and coral reefs.
Seagrass meadows are vital part of a rich and diverse shore. Dead seagrass leaves as they decay, provide nutrients to other ecosystems. By trapping sediments, the meadows keep the water clear for coral reefs to develop nearby. The stabilised areas where seagrasses grow may eventually be colonised by mangroves.

According the Seagrass-Watch website, seagrass meadows are considered the third most valuable ecosystem globally. The average value of seagrasses for their nutrient cycling services and the raw product they provide has been estimated at US$ 19,004 per hectare per year (1994). This value would be significantly greater if the other services of seagrasses were included.

MORE about seagrasses on the Seagrass-Watch website and wildsingapore fact sheet.