Just in time for Blog Action Day, this report on the vital role of seagrasses in fighting climate change! This is why we need to learn as much as we can about the seagrasses of Singapore. Bravo TeamSeagrass for contributing to this important task!

Although mangrove forests, salt marshes and seagrass beds together cover less than 1 per cent of the world’s seabed, they lock away well over half of all carbon to be buried in the ocean floor. They are estimated to store 1,650 million tonnes of carbon dioxide every year — nearly half of global transport emissions — making them one of the most intense carbon sinks on Earth. 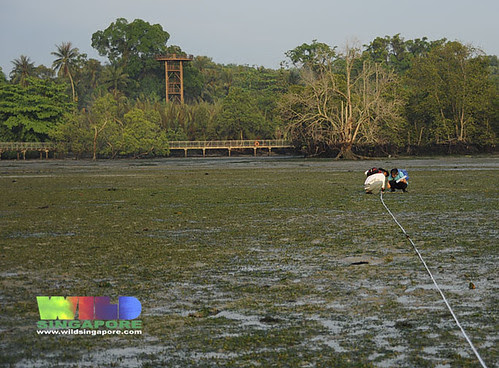 TeamSeagrass monitoring seagrasses
with mangroves in the background, at Chek Jawa.
Their capacity to absorb the emissions is under threat, however: the habitats are being lost at a rate of up to 7 per cent a year, up to 15 times faster than the tropical rainforests. A third have already been lost.

Halting their destruction could be one of the easiest ways of reducing future emissions, says report, Blue Carbon, a UN collaboration.

Seagrass beds often raise the level of the seabed by up to three metres as they bury mats of dead grass but turbid water is threatening their access to sunlight.

“We already know that marine ecosystems are multi-trillion-dollar assets linked to sectors such as tourism, coastal defence, fisheries and water purification services. Now it is emerging that they are natural allies against climate change,” said Achin Steiner, UN Under-Secretary General.

The potential contribution of blue carbon sinks has been ignored up to now, says the report, which was a collaboration between the United Nations Environment Programme, the Food and Agriculture Organisation and Unesco.

“The carbon burial capacity of marine vegetated habitats is phenomenal, 180 times greater than the average burial rate in the open ocean,” say the authors. As a result they lock away between 50 and 70 per cent of the organic carbon in the ocean.

To protect them the authors suggest that a Blue Carbon Fund be launched to help developing nations to protect the habitats.