It was a rather gloomy first field orientation for TeamSeagrass at Chek Jawa on 20 Jan 07. And it was not just due to the weather. 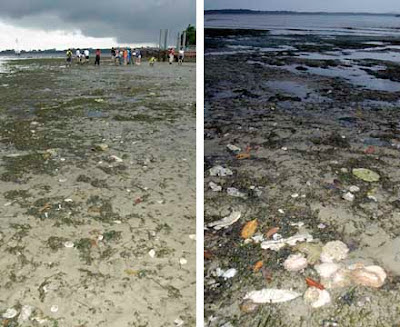 Adelle and Choon Beng had earlier updated TeamSeagrass about the mass death at Chek Jawa.

We steeled ourselves, but still our hearts broke when we arrived.

Carpet anemones and sea cucumbers appear to be the main casualties. 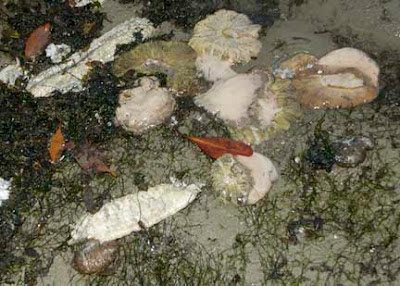 Despite the sombre scene and smell of death everywhere, TeamSeagrass carried on with our mission. Siti explains with living examples of seagrasses while Wei Ling and Robin set up the lines. 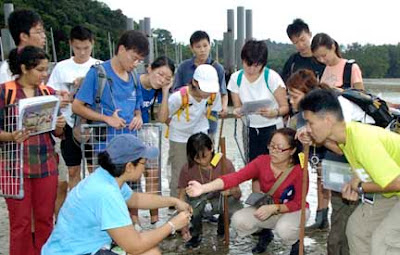 The first site is up and monitoring in progress! 50m by 50m seems huge. But it is dwarfed by Chek Jawa!

A long walk to the northern sand bar and the second site is set up. I am deeply impressed by the enthusiasm and dedication of all the volunteers! 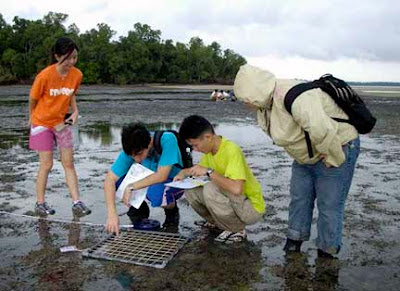 While everyone is busy, I take a closer look at the casualties.

The carpet anemones seem to be bloating up and then exploding. Those that are still intact have distorted tentacles. Many were in 'pieces', and often I came across only 'melted' remains. It was heartbreaking to see so many of these magnificent creatures in distress, death and decay. Sea cucumbers were among the many casualties. Ball sea cucumbers (Phyllophorus sp.) seemed to 'deflate' like bad ping pong balls. A similar fate suffered by what seemed to have been Sandfish sea cucumbers (Holothuria scabra). There were hundreds of these poor animals in various states of distress and death.

I failed to find any living sea stars (Archaster typicus), and only saw two badly decomposed ones. The noble volutes (Cymbiola nobilis) also seem to be distressed, and many clean empty shells were seen, without hermit crabs. There were also many empty gong-gong snail shells (Strombus canius).

The cause of death?

Possibly the huge influx of freshwater from the Johor River due to the recent massive flooding there, following the highest recorded rainfall in 100 years. Chek Jawa lies just at the mouth of the Johor River. Locally, Singapore has also experienced record rainfall. All that freshwater probably affected the osmotic pressure of these marine animals. We're trying to find out more about this.

Apparently, there is mass death on Beting Bronok as well, a fabulous underwater reef off Pulau Tekong. We have yet to check on Changi and Pulau Sekudu which are nearby (once again, I lament that there are not enough of us to cover the shores during the few days of low tide).

Adelle shared that the Ubin villagers say this sort of thing has happened before in the past. And Chek Jawa eventually recovers. So there's some hope yet.

Although this development is very sad, it is perhaps timely as TeamSeagrass launches its first field trip. It highlights the urgency of monitoring our shores in the face of climate change. In fact, during last week's Indoor Session, one team member specifically asked about the impact of global warming on our seagrasses and shores. Sadly, one of the results is right before us.

On the way to our monitoring sites, the upper shore was thickly covered with dead leaves of the Ribbon seagrass (Cymodocea rotundata). I have never seen anything like this before. The other seagrasses, however, seemed to be doing alright. Although disturbingly, we didn't manage to see any Fern seagrasses (Halophila spinolusa).

Not everything is dying. Peacock anemones (Order Ceriantharia) were still seen in what appears to be good health. The sand dollars also seemed to have survived.

A more cheerful find was a little fish, a wrasse. There was also a large patch of living green mussels (Perna viridis) in the middle of the sand bar. Although this is probably a sign of a change in conditions as these mussels are not usually seen in the sand bar.

Siti and Wei Ling have an even more heartening sighting.

[Siti checked with Len McKenzie of Seagrass Watch HQ who replied "It definitely looks like a dugong feeding trail in the pic. Typical in width, length and path." Wow! Isn't that fabulous?!]

Amidst the deaths, Chek Jawa still has a smiley dugong feeding trail! 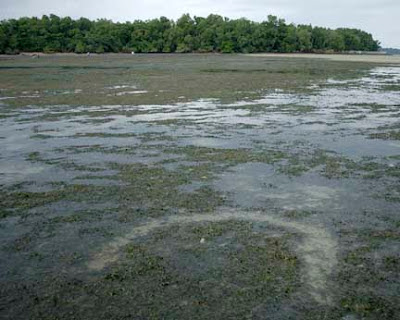 Indeed, we wish our favourite shore a speedy recovery.