Semakau: Stuff of dreams and then some...

Pulau Semakau. Better known as our nation's landfill but home to a vast meadow of seagrass, stretching over 2km in length. 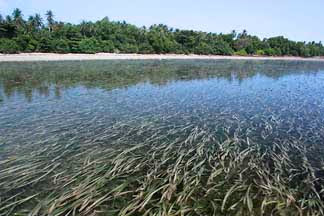 When we at Team Seagrass think of Pulau Semakau, its with a mixture of eagerness and apprehension. Eagerness because it never fails to fascinate us - Semakau is never run-of-the-mill - and apprehension because one can never hope to cover the whole shore during the short span of a low tide. A trip to Semakau leaves one exhausted but aching for more; we're always wishing we had just a little more time to walk that little bit more.

To get to Pulau Semakau, we take a boat from West Coast Pier. Never happy just twiddling our thumbs, Team Seagrass gets right to work on the boat labelling the aluminium stakes that are to mark our transect points at the three (yes, THREE) sites at Semakau. 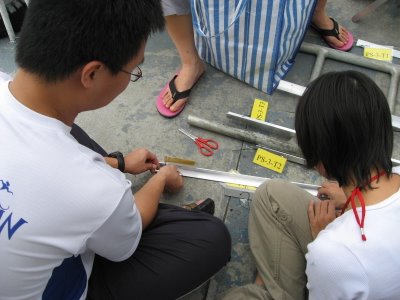 Many hands make for light work, so Cheng Puay, Shufen, Wei Ling, Robin, Andy and CK chipped in with the labelling.

The water was still pretty high when we got to Semakau, but undeterred, we jumped right in, or rather, climbed down a ladder off the boat into the cool waters of Pulau Semakau.

(This picture is from Swee Cheng, who was one of the first to get off the boat in search of his sponges)

After a good many 'Ohhhh man! The water is cold!'s we waded across the flat in search of drier place. 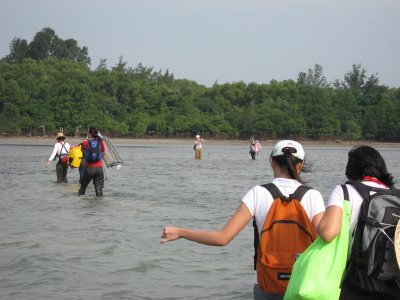 And then, calamity struck. Nor Aishah felt something heavy fall on her foot. Initially, we thought it was nothing because there wasn't a hole in her bootie, but then she started feeling faint and her lips turned blue, never a good sign folks! Seemingly intact bootie aside, there was indeed, a hole in her foot. Ouchie! After much deliberation, we boiled it down to a sting ray and after a good dose of 'Stingoes(TM)' to the hole, I applied a pressure bandage.

This demonstrates beautifully, the wonders of having a first aid kit and first aider on hand. They're even trained to provide "reassurance and support" to the victim and fashion a way to keep a swollen foot elevated from ordinary objects like waterproof dive bags! Here I am, 'reassuring' Nor Aishah that she's (probably) not going to cark it. 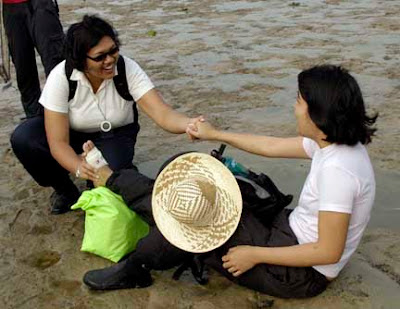 It of course helps that the victim is not screaming her head off and completely freaking out. Nor Aishah seemed to be taking the hole in her foot pretty well and even assured us that she'll be ok to sit around till we're done setting up transect points. In hindsight I think she was just delirious ;) She was attracting the attention of all sorts of venomous creatures that day, including this Dog-faced watersnake. Apparently this one is apparently only mildly venomous. 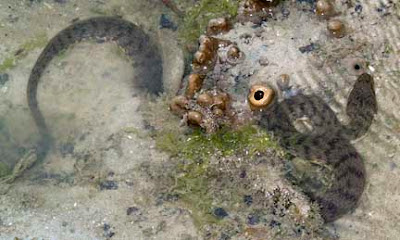 But like I said, Semakau is HUGE and time and tide doesn't wait for no man, woman or Team Seagrass, so after giving Nor Aishah an emergency whistle with the instructions "blow if you're being attacked/feel faint/are dying", we set off to set up our three sites. 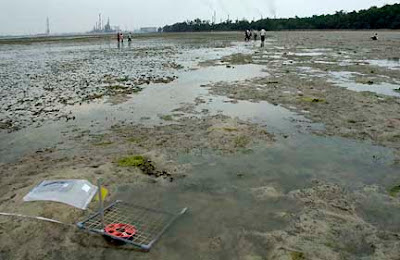 The plan was to set up one site and leave a few people to do the monitoring while we set up the other two sites. Here, we've set up PS-site 2 and Helen, Cheng Puay and Siti Nurbaya start monitoring the seagrasses. 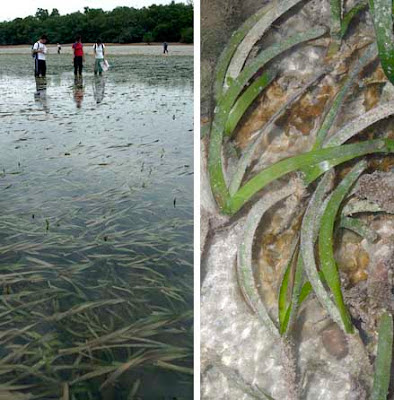 Semakau has a whole host of seagrasses, all of which look similar to Enhalus acoroides because they grow SO BIG! The one in the picture above is Cymodocea serrulata. Note the v-shaped leaf scar which is the defining feature for this species according to "Seagrasses of the Indo-West Pacific" and how the leaf blades fan out instead of growing straight out.

The order of the day was hammering the tagged stakes in... (Shufen prays I don't decapitate her by accident)

Laying out the transect tapes... While Shufen and CK make the end-point readings Some of the old drift nets however, are really big and have pretty much become part of the landscape. The one on the left is overrun with algae, while the one on the right seems to be newly laid down. 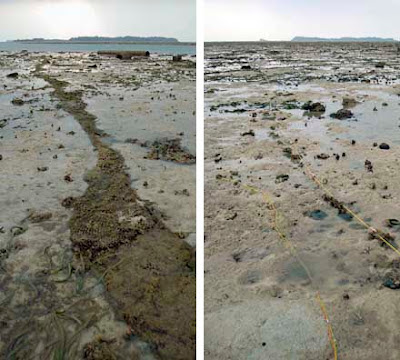 Special finds of the day include Ria's Dardanus hermit crab. She disturbed it trying to feed on a Noble volute. It escaped by leaving its shell! 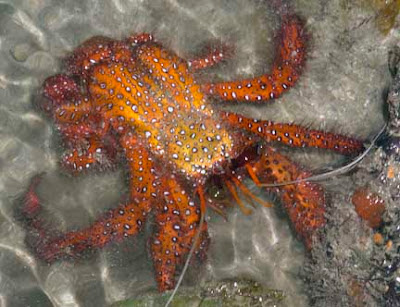 And this Enhalus fruit which has split open, which puts an end to the mystery of 'how Enhalus acoroides spread its seeds'. Shufen and I were very excited by this. Some might say that when one gets overly excited by splitting fruits of seagrasses, its time to get out more. But seriously, how do you get more 'out' than this? And clearly, despite having to battle things that can injure and incapacitate you, cold amphibious landings, being stuck thigh deep in soft mud and trudging up and down a 2km stretch of seagrasses, we're still a smiley bunch :) Hope to see you guys at Semakau soon! :)

PS from Ria: Swee Cheng shares his photos of the fascinating sponges on Semakau and will add the IDs and other wacky inside stories (literally) about sponge spicules and stuff. Thanks Swee Cheng!
posted by sits at 1:18 PM