TeamSeagrass star find in the news! 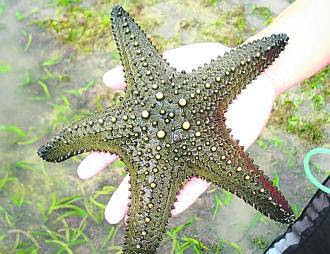 The sea star discovered on Cyrene Reef during our teamseagrass monitoring session is in the news today!

SINGAPORE has a new star to call its own.

This large five-rayed sea star is not new to science, but it is a new and spectacular addition to Singapore's already substantial inventory of living stars.

Lacking a common name but known in the marine science world as Pentaceraster mammillatus, it is in the same family as the more familiar cushion star and the knobbly sea star, which are still quite common on Singapore's remaining reefs.

The 'mammillatus' part of the name refers to the rows of nipple-like protuberances that cover the surface of the animal and give it a studded or armoured appearance.

The sea star was first sighted early last month on a seagrass monitoring trip at Cyrene reef, run by volunteer group TeamSeagrass and staff from the National Biodiversity Reference Centre of the National Parks Board (NParks).

Fast forward to a week ago: Armed with a permit, an enthusiastic search party made up of staff and students from the National University of Singapore's Raffles Museum of Biodiversity Research, NParks and others - including visiting regional echinoderm specialist David Lane - set out for a dawn low-tide walk on Cyrene reef.

A rare and exciting find

THE discovery of this attractive species, one of about a dozen of its kind in the Indo-Pacific, is in some respects a remarkable surprise, given its large size and the fact that sea stars and their relatives had been intensively surveyed and studied throughout the 1990s by a team of NUS and Belgian marine scientists.

Another surprise is that this star was previously known to exist only in the western Indian Ocean and the Red Sea, so its presence in Singapore waters represents a considerable range increase.